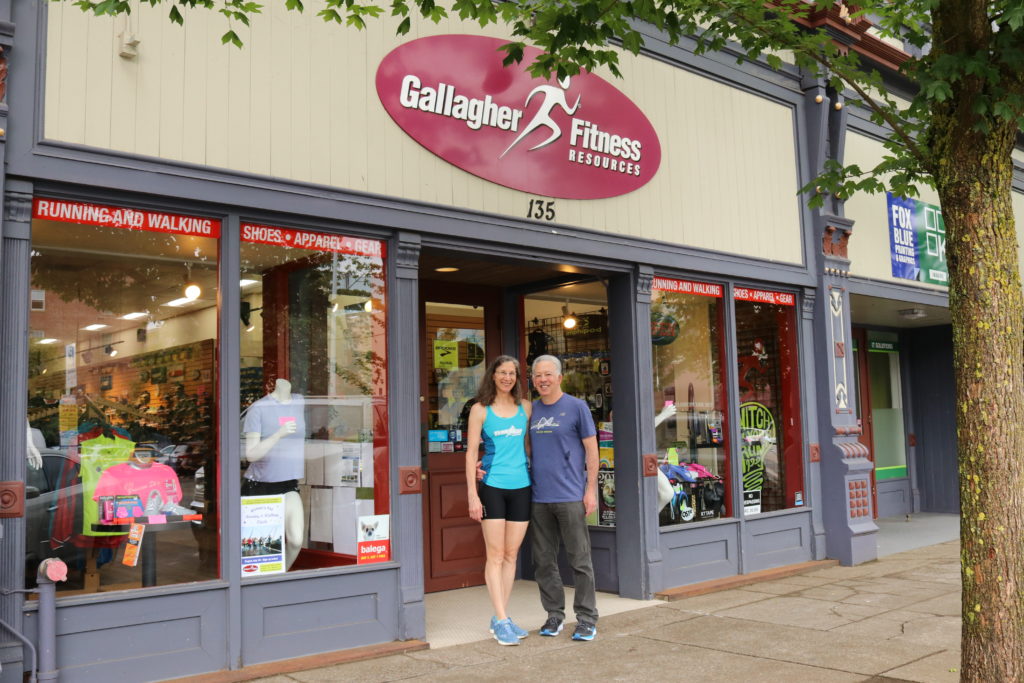 Originally featured in the Autumn issue of 503 Magazine.

Two things brought Susan Gallagher out to Oregon: the natural beauty of Oregon – having only seen pictures of it while living in Nebraska – and the running scene. Susan originally landed a job in occupational therapy at Salem Hospital. John Gallagher graduated from Notre Dame University, lived in Cleveland and ran with a group out of a local running store. It was small, but it was the place to buy shoes and run with other enthusiasts. When he moved to Portland in 1986 and was getting his teaching license, he worked at Pace Setter Athletic (now closed), an athletic apparel store, and fell in love with the job. Susan and John met through running,and as they say, “the rest is history.”

When the opportunity to open a running store in Salem in 1996presented itself, John was ready. “When we first opened in 1997, Riverfront Park was less than a year old. We were aware of the intentions to build a bridge to connect the parks– the railroad bridge was abandoned and beat up at the time. Coming into Downtown Salem, we knew the potential for the parks being connected. For a walking store, it made total sense, [and] it’s exactly where we wanted to be.” The pace of Salem delayed the building of the bridge. The Gallaghers hoped the bridges would be complete and they would be able to take advantage on the new market opportunities in 2000 or 2002.

Instead, it took over twenty years for the bridges to be completed and connected. In those years, John sat on the Salem Parks & Rec boards,urban development committees, Mayor’s task force and the Downtown Salem Association.“We jumped into things just to see how things worked, and how we could urge them and push them along,” said John. “We knew what the payoff would be, if it would happen. Susan worked with Salem’s Friends of Two Bridges.”Additionally, they spent a lot of time during On Your Feet Friday sponsoring and encouraging bridge development.They were most concerned with howto extend their business beyond the four walls of their store. By remaining inside four walls, a small retail business may not last. Even before cellphones ,internet, and social networking, the Gallaghers knew they needed to build a business that would never close, because people would always walk and run. They wanted to be there to provide shoes, great apparel, a pair of socks, or an awesome sports bra. They believe their experiences in competitions like track and road races, relays, and various other events help them bridge the gap between the athletes and those who want to befit enough to walk with their families in Disneyland.

Susan is still passionate about what they do. “It’s so gratifying after 45 years in competing to teach people how to get started on their fitness path – and to do it right so it’s a fun and lifelong practice. We do that through our Monday Runday [after the run, they stop at rotating brews for a bite and more time to socialize],Women’s Clinic, and other networks.” A large part of the Gallagher’s drive to set up shop in Salem was also the people. Susan said, “when you own a small business, you’re practically on it every day… every minute of everyday… we wear multiple hats. If the computers go awry or need upgrading,[John’s] on that. The customers walking in the door are so important. Having that great customer service and treating our employees as best as we possibly can is critical. “Salem has provided support through the customers for 22+ years,” Susan said. “When we work that hard all the time, sometimes it’s a nice little break to go to a local brewpub, a local winery, and have great food from local places. That in and of itself makes [owning and running a business] so much fun. Not only that,the walkers and runners we meet who are customers and attend and participate in our group walks and runs and events come with us so we can introduce those places to our customers and helps continue to build the community.”

On Your Feet Friday is an event they started to get hundreds of people to come have a scavenger hunt and explore different downtown businesses. Jim Vu, the Main Street Salem Association, and downtown businesses like Venti’s, Salem Summit, and 1859 have taken over the event to continue to bring life to Salem. High Street Hustle was the result of collaboration with the city, state,community, and residents of High Street. The event got over a thousand people into downtown for four years in a row, then was passed on to Sherri and Jason Jacobson. It has since merged with Spirit of Oregon and takes place Oct. 6. The entrepreneurial spirit that drove them to start and then subsequently pass on the community events they’ve engineered is now taking a back seat to the ever-pressing need every retail business understands: customers.

“We have to nurture our own customer base. We have great relationships with customers, their friends, and the wider community. We need to maintain relevancy for our business in Salem to keep current customers and to get new customers. As a small retail business, you need customers to keep going. For us to be able to keep it going, and to keep that enthusiasm and energy, we have to stay relevant,” said John.The Gallaghers find themselves competing with online stores and larger retailers to continue to maintain visibility in their market. They need the support of the Salem community. “We sunk hours and hours of our time [into community events] but we haven’t gotten paid for our time. It’s always been out of goodwill and extending ourselves into the community to help [it] be a better place,” Susan said. John used a baseball analogy to describe the changing environment. “Business used to run like a batter vs. pitcher. The pitcher can throw any kind of pitch – fastball, curveball, spitball, anything he likes. But he’s still throwing from the mound. There’s that one rule, and no one’s throwing a pitch from second base, or from left field. Now it’s no longer about the pitcher on the mound – the balls come from every direction, and as a business, you need to be able to hit them. The store has to be able to hit all those pitches before being able to extend beyond the walls.”

What the internet can’t offer is the expertise the Gallaghers possess, and the ability to physically try on shoes.They do their best to meet the need of the customer, and don’t sacrifice function for aesthetics, and always provide excellence. The Chamber of Commerce is one way for the Gallaghers to get a heads up on those wild pitches. “A lot of the challenges of running a business are knowing what’s going on within government and policy decisions that are being made. It’s a full-time job, plus doing what we’re doing. I need to have a filter for what’s out there that I need to factor in the future and how we’re going to run our business…it’s business first and things I need to be able to predict and factor in to profitability,” said John.

Despite the challenges of running a business, they still love what they do.“I just feel grateful…we still have our health and are able to put in the long hours and still have that passion to do what we’re doing. And we do, we do have that passion and Salem and the Chamber are parts of creating opportunities and working with business to make things happen,” Susan said.