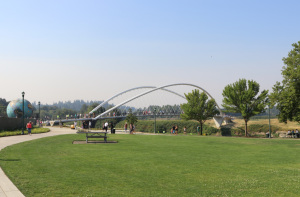 A common theme any visitor will hear at the Salem Area Chamber of Commerce is about how awesome Salem is. The city is bursting at the seams with incredible opportunities. On August 2, 2017, the opening celebration of the Peter Courtney Minto Island Bridge was a testament to just that.

Since 1975, a pedestrian connection between Minto Island and Downtown has been envisioned by the Urban Renewal Agency, City Council and broader community. Years later, the groundbreaking for the project took place on May 21, 2015. And finally, on August 2, 2017 the grand opening.

To celebrate the grand opening, a parade marched across the Wallace Marine Park footbridge and into Riverfront Park. Led by the North Salem Color Guard and a bagpiper, Salem Mayor, Chuck Bennett and Senate President, Peter Courtney walked to address the crowd side-by-side. In the crowd were state representatives and senators, including Senate Minority Leader, Ted Ferrioli, former Salem Mayor, Janet Taylor, and a few city councilors.

Oregon Senate President Peter Courtney, the bridge’s namesake, who is 74, recalled that he was a Salem city council member in the 1970s when city leaders wrestled over the decision to build a skybridge in downtown Salem. Throughout the ceremony, a sternwheeler’s horn blasted at a nearby construction site, a tell-tale sign of Salem’s continued growth. 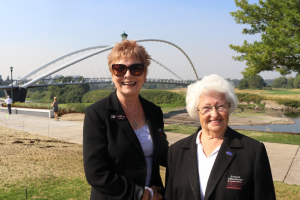 The pedestrian and bicycle bridge, along with the adjoining trail, connects three riverfront parks in the Downtown area: Wallace Marine Park, Riverfront Park and Minto-Brown Island Park. The City has plans in place to connect the remaining trails together, including under the Commercial Street Bridge, and the project will link eight popular parks, the equivalent of more than 30 miles of trails. These connections will serve as Salem’s largest off-street pedestrian network.

“We are celebrating Peter Courtney’s long service to the community with the naming of the bridge,” said Mayor Chuck Bennett. The mayor spoke about many of the opportunities the bridge presents for the City of Salem such as, increased homeownership value, travel and tourism dollars and the expansion of city parks. 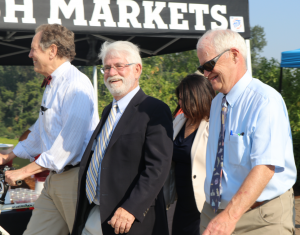 The Peter Courtney Minto Island Bridge is a boost to the Salem economy because the miles of connecting trails that run along waterways and through city parks, now larger than Central Park in NYC, offer opportunities for marathons and recreational events, which contribute to brand new investments in downtown Salem. The bridge’s design is unique to Oregon, and will help shape Salem’s image, skyline and waterfront for years to come. Visitor dollars strengthen the local economy by supporting 6,220 jobs and generating $2.5 million in local tax revenue.

Along with that, the new bridge is an important asset because it increases home ownership value and home desirability in Salem. In 2011, the National Homebuyers Association survey cited that access to parks and recreational trails was the #2 purchase factor for homebuyers. Even better, a 2008 CEOs for Cities study found that homes located in areas with above average walk and bikeability are worth more than $34,000 more!

Salem is an incredible city and the Peter Courtney Minto Island Bridge is a testament to the growth and investment the residents have put in place to ensure the city continues to grow and thrive.