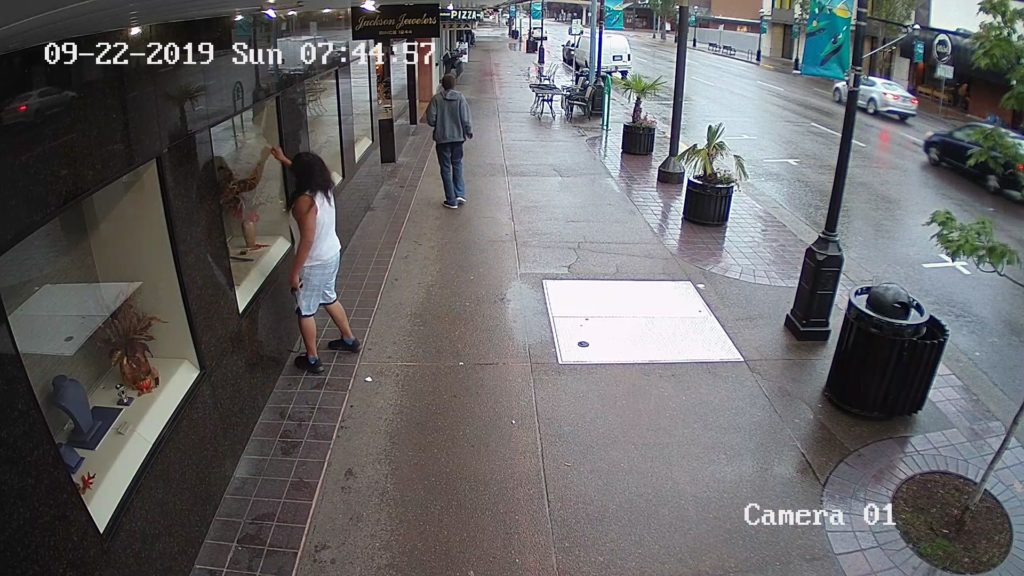 I know it has been said, that when you speak up to defend yourself, you are open to attacks. But I have never felt that way in Salem before, but on September 22nd, our building was vandalized. Sadly, it felt deliberate. I was proud to state my case for protecting my clients, employees, & friends, before the city officials at the meeting on Sept 12th, in support and agreement with the proposed Sit-Lie ordinance.

It’s tough, that after 75 years of operating a business in downtown Salem, that we have to lower ourselves to these societial tactics. We have all been very civil, tolerant of equal liberties, open society for as long as I can remember. On September 22nd, 7:30am, our building was vandalized. Our five storefront glass windows were scribed with a hard stone. It was only our windows that were targeted, even after the guy passed about 50 storefront windows on his walk from Commercial Street to Liberty.  I have video of the attack, and it felt deliberate. You can see him turn the corner at Starbucks, and make a straight line to our glass, scribe our glass, then turn around and run off down Court Street towards High Street.  The estimate to repair glass at this point is $1,200.00. But if they can’t be polished, I am looking at replacement of $6,000 to $10,000.

I am concerned that the tone left by the partially-homeless group that spoke at the last meeting on September 12th. Their collective “eye for an eye” approach, felt like they would target a person and/or a business for speaking out against them. However, I thought they would never act on it.  As I learned in the previous task force meetings from the formerly homeless men who now serve at the mission, the group on the streets do not intend to conform to Salem’s societal rules. If Salem continues to allow free access to all streets and sidewalks, then they will camp, drink alcohol, do drugs, bathe, and defecate wherever they feel like. If you install a port-a-potty, that is a good accessible bathroom, but equally it is a new place for doing drugs. I am nervous now, that the tone they used at the testimonial, an “eye for an eye”, was that of power. They feel that they hold the power of force, and can do whatever they want, whenever they want. That includes damage to property and potentially individuals, if their way of living is not sustained. I think the Sit-Lie offers other benefits, as it should drive the homeless of Salem to seek help, learn to say no to drugs,  and stop averting their lives by staying on the streets.

We are all simply trying to operate small businesses in downtown Salem. Personally, we have 10 employees, and are worried that they are next to be accosted leaving work in the dark months of winter. Everyday another client tells us that it’s getting worse downtown with the homeless, and they don’t like coming down. The Sit-Lie ordinance proposed, serves as a direct defense to the protection of our property and the rights to create a safe environment for shoppers, diners, & overall citizens in business district that are currently being ignored.

Please keep Salem safe for all, please help the homeless of Salem, and please support the Sit-Lie ordinance.