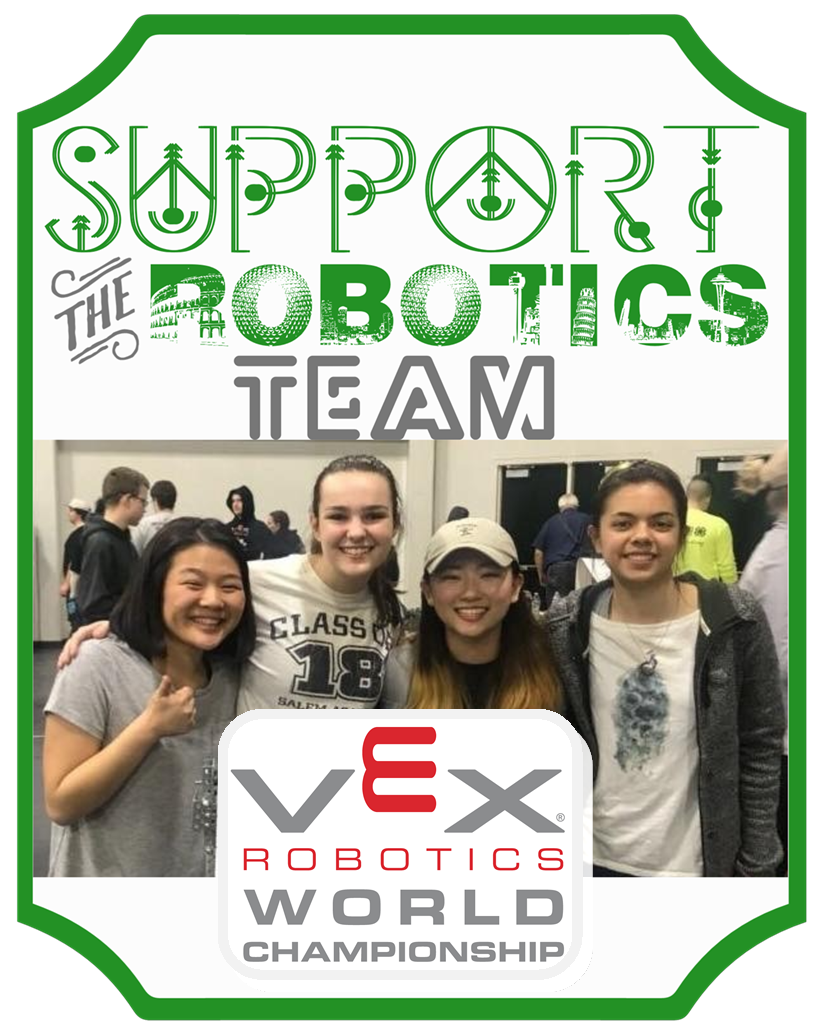 Three years after launching our STEAM program, Salem Academy has an opportunity to send the only all-female robotics team from Oregon to the VEX World Championship in Louisville, Kentucky April 25 – May 1. The team consists of seniors Kaytlin Wearne, Bethany Bibler, Teagan Thurston (in their 2nd year together) and Kieun Nam (a 4-year international student from Korea).

Their journey of excellence began last school year when Kaytlin, Bethany, and Teagan’s team earned the Judge’s Award during their first year of competition. Success continued in fall 2017 as they added new team member Kieun. In December, the team placed 7th out of 41 teams and earned the Judge’s Prize for Design. They followed this success with a 1st place finish and tournament victory in January at West Salem High School. Finally, on March 9 & 10 they competed at the state tournament (hosted at Chemeketa Community College) and joined forces forces with Vale and Molalla in the final battle, ultimately placing 2nd and earning their ticket to the World Championship.

“These young ladies embody determination, perseverance, constant improvement, and excellence – not only in class but in life.” (Robotics Instructor Jeff Kline)

“I have had an amazing time building the robot and being one of two drivers on the team. I’ve had a lot of growth in my engineering skills and can grow even more. My goal is that we can represent Salem Academy well at worlds as well as perform well. I’m excited to be introduced to so many new people from all over the world and making new friendships.” (Team Captain/Senior Kaytlin Wearne)

“Since I am planning to study mechanical engineering for my future career, the robotics class is definitely a great opportunity for me. While at Worlds, personally I am not looking for the recognition, but I am looking forward to the experience and lessons gained at the international level.” (International Student/Senior Kieun Nam)

“It’s been super fun time building and driving robots, problem solving, and working as a team with friends. At worlds I hope to win a majority of our matches, beat our previous yellow cone stacking limit, and have lots of fun!” (Senior Bethany Bibler)

“I enjoyed going to tournaments and adding improvements to the robot afterwards. At Worlds I just hope that we put our best foot forward and smile at whatever the outcome is!”(Senior Teagan Thurston)

Note: Salem Academy’s STEAM program launched in 2015. Thanks to a recent grant from the Larry and Jeannette Epping Foundation, a remodel of the campus Industrial Arts building was completed. It now houses the Salem Academy STEAM Lab – including a VEX robotics practice field. For more on the VEX World Competition see attached document.
To help support their dream of going to the VEX World Championship – DONATE NOW!