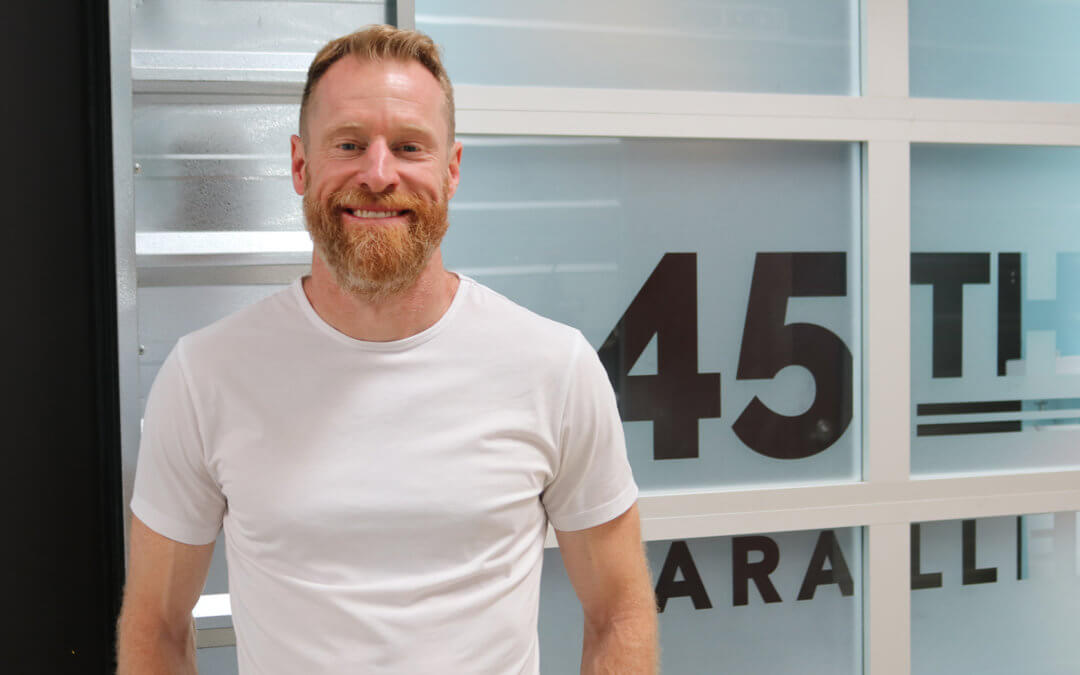 Retired Portland Timbers star Nat Borchers has set his sights on a new goal off of the pitch: Developing Salem’s 45th Parallel building into a new hotspot for commerce in the Willamette Valley.

Located on Hyacinth Street in northeast Salem, and in between the busy thoroughfares of Portland Road and Salem Parkway (recently renamed Dr. MLK Jr Pkwy) with easy access to I-5 and downtown Salem, the mixed-use 45th Parallel building is already drawing plenty of local traffic to its shops inside. But now, with a new, well-known, and ambitious owner in charge, it may be on its way to becoming a one-of-a-kind retail destination in our region.

Before buying the 73,000-square-foot building in January, retired professional soccer star Nat Borchers – best known to members of our community as a member of the 2015 Portland Timbers Major League Soccer (MLS) championship team – fully understood the amount of time, work, and financial risk he would have to take on with the project. But like with any of his previous investments in the area, the sheer potential and promise of the building and its location in Salem outweighed the risk. 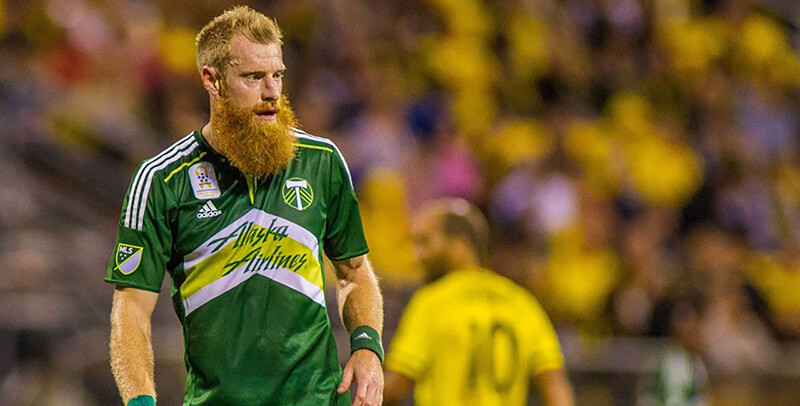 “When I started investing in Salem five years ago, I was attracted here because it was similar to where I grew up in southern Colorado,” Borchers says. “I feel like Salem is the right size for what I’m used to and it’s really the right size for investment. It’s a secondary market to Portland, you have the government here with built-in jobs, great hospitals, and great universities and colleges. All of those things come together to form this community, but then you have the people as well, and the people I’ve met here have been fantastic.”

Like many investors, Borchers started small, but unlike most, he was scouting his potential investments after soccer practice while playing for the Colorado Rapids of the MLS. With a few thousand dollars he had earned from playing and at the suggestion of a friend’s mother, who was a real estate agent at the time, he and that friend pooled their financial resources together to purchase his first property in Denver, which is when Borchers says he “caught the bug” for investing.

Being a natural competitor who also understood his career as a professional athlete was finite, Borchers continued to grow his real estate business by acquiring more properties on the side throughout his playing career. Today, his company, NDB Real Estate, owns and operates a multitude of properties, including several in the Salem area, but perhaps none more unique or notable than the 45th Parallel. 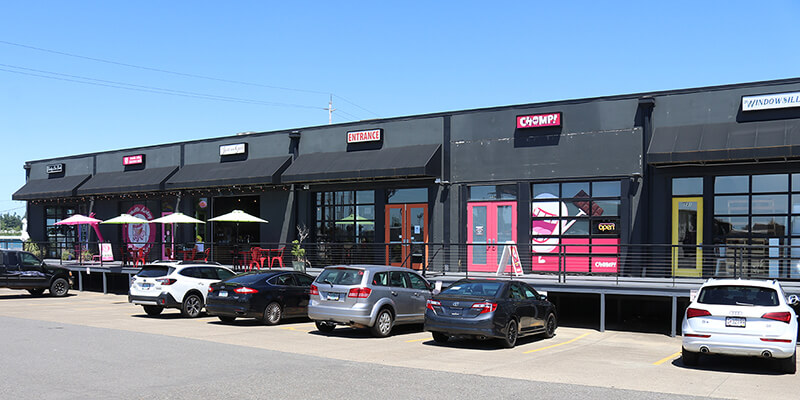 The expansive facility includes space for 66 tenants and is currently home to a wide variety of businesses and service industries, including hair salons and barbers, retail shopping, a coffee shop and coffee roaster, and even a vegan chocolatier. And while the building already has plenty of appeal to prospective tenants and local patrons alike, Borchers has grand plans to build and improve upon the existing structure to bring even more business traffic.

Borchers says part of the reasoning behind the aesthetic upgrades is also to make the 45th Parallel a more “female-friendly” destination, especially considering that more than 25 of its tenets are businesses in personal care services (hair and nail salons, for example), which serve mostly female customers. 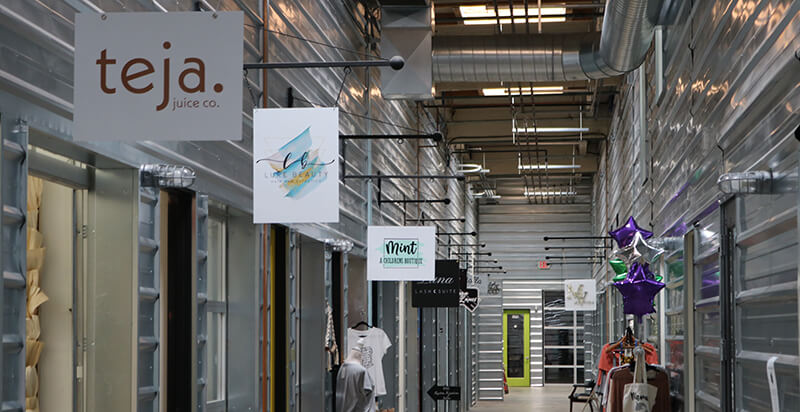 “We’ve also done some things with color coordination inside just to get a color scheme that’s a bit brighter and friendlier,” Borchers says. “And we obviously want to focus on safety as well. We have a full-time security person who is on site at all times of day to make sure the building is safe.”

Borchers says supply chain challenges related to COVID have made some upgrades a little more difficult, but those challenges aren’t stopping him from pursuing an even bigger vision for the 45th Parallel, which includes developing on two pieces of adjacent land that also come with the property. Borchers’ development plans include an additional mixed-use building with apartments and a drive-thru business or restaurant of some kind.

“It’s all going to feed into the building’s needs and the tenants’ needs,” Borchers says about the potential developments and additions. “Hopefully, it will increase some retail traffic for our building. I’m just envisioning an ecosystem where small businesses can thrive with this building and with those parcels.”

Vendors interact with community members at “Summer at the 45th” on July 23, 2022. Photo: Jerry Stevens

For Borchers, the core mission of the project is to build something that can serve and support the community. And although he considers much of the work unfinished, the building is already becoming a hub for community events that support small businesses. Just this last July, the 45th Parallel hosted its “Summer at the 45th” event, which featured more than 80 vendors in and around the building, including Chamber members Michelle Ashley Custom Cakes (a 45th Parallel tenant) and Becka Makes Buttons.

Getting more involved in Salem has also become a goal for Borchers, who credits friend and fellow local entrepreneur Conrad Venti (partner at Venti’s Cafe and Basil & Board) for helping him get more integrated into the Salem business community.

“I love the fact that this is a community that gives back because I love doing that. Those events (non-profit fundraisers) are always fun and it’s satisfying to get closer to those organizations that really need our help. I credit Conrad for bringing me in and I’m fortunate to say I have a lot of friends in Salem now who give me a good pulse on the business world.”

“And signing up with the Chamber of Commerce has been another great avenue for me to meet other like-minded individuals and to help each other,” Borchers added. “We’re all in this thing together as a community.”