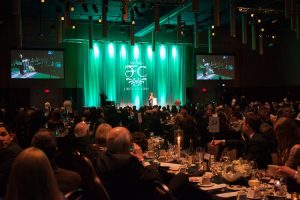 Thank you to our sponsors and guests who made the night a success!

Since 1950, the Salem Area Chamber of Commerce has honored those who exemplify servant leadership. These individuals improve the lives of those in the Salem community by serving through their businesses, volunteering and philanthropic efforts.

The 68th Annual First Citizen Awards Banquet on March 2, presented by Pioneer Trust Bank and Mountain West Investment Corporation, was an evening of joy, laughter and celebration. Guests excitedly chatted with one another in formal dresses and suits, and the award winners could be spotted with family and friends and floral boutonnieres pinned to their garments. It was a special evening. Click here to see photos on Facebook.

Award winners are recognized in the categories of Outstanding Young Professional, Distinguished Service and First Citizen.

These men and women do remarkable things to make our community a better place, and are examples of what happens when ordinary people act. 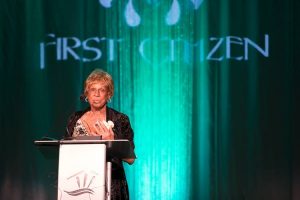 This year, Salem’s First Citizen was awarded to Senator Jackie Winters. Being recognized as a First Citizen is an incredible display of appreciation for individuals that have committed their lives to service, without any expectation of recognition. The First Citizen is considered one of Salem’s most prestigious awards, and the individuals who have received it form an honor roll of the city’s most prominent leaders.

Senator Jackie Winters is a pillar in the community and was elected to the Oregon State Legislature in 1998 as the state’s first African-American Republican. She has earned the respect of all who know her and thousands of others across the state. Winters has owned a successful retail restaurant, supported small business in her many endeavors and has served all the people of the Salem area for more than 40 years.

She has lifted herself up by her own bootstraps from a very humble beginning and has worn many hats throughout her life as an entrepreneur, peacemaker, advocate and representative of the people.

Salem wouldn’t be the city it is today without Senator Winters’ incredible dedication. Her life is a great example that with a little hard work and a strong character, the American Dream is possible. 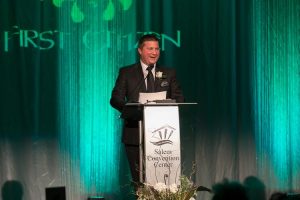 Leaders don’t surface overnight.  Very few young professionals have made the splash Alex Casebeer has in his first decade in the Salem business community.

Alex shows respect and appreciation for the hardworking employees at Capitol Auto Group, as well as the volunteers who help at local organizations. He knows that it is not the leaders of an organization that make it successful; it’s those hardworking individuals who, as a team, work together.

Alex’s dedication to our community is evident in his work with organization’s such as Young Life, the Boys & Girls Clubs of Marion & Polk Counties, Salem Leadership Foundation and Salem Health Foundation to name a few. Alex models what a good citizen should look like; he never turns away from a challenge, whether it’s as a business owner and a dedicated volunteer to the numerous non-profit organizations he is involved with. 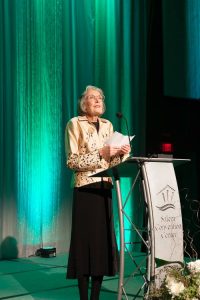 The Distinguished Service Award is given to individuals who have uniquely contributed to the Salem community and who have dedicated their lives to service. These awardees are passionate for others and are in the business of changing people’s lives.

The first DSA winner of the night was Elisabeth Walton Potter, a woman who has dedicated her life to championing cultural appreciation in Salem. She is the story teller and spokesperson for things easily left unsaid about who and what Salem has been. Elisabeth Walton Potter has made sure to honor Salem’s past and its present cultural contributions. She founded the Friends of the Willamette Heritage Center and Friends of the Pioneer Cemetery – two cultural landmarks in Salem that help make our community what it is today.

Elisabeth is a contributor to the Oregon Online Encyclopedia Project, which launched in 2009 and personally purchases and donates art from local artists to be placed in collections of the City, the State and Willamette’s Hallie Ford Museum.

She is extremely humble and tries to fly below the radar, but click here to watch her surprised reaction as she learned of her nomination as a Distinguished Service Award recipient. 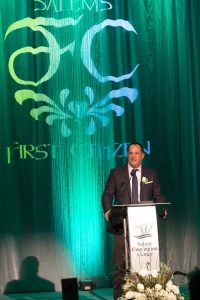 The next Distinguished Service Award winner is Rich Kansky. He has owned and run Green Acres Landscape for nearly 25 years and he works tirelessly to maintain the integrity of Green Acres’ mission and values, especially through his commitment to clients, employees, vendors, the environment and community.

His honest approach to life is admirable. Rich recognizes the importance of sticking to his roots and has always made it a priority to serve his community. He gives second chances and sees good in people where others may be blind to it. He hires those in our community who some may find “unemployable” such as people with criminal backgrounds or learning disabilities. 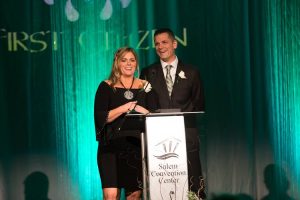 The final Distinguished Service Award winners are Mark and Tiffany Bulgin, a husband and wife team that started the Ike Box in downtown Salem to be a place for troubled of challenged youth. Their passion was created from a tragic loss of their first-born son, Isaac. Isaac passed away two months after he was born in October 1998. 2018 is the 20th anniversary of Isaac’s passing.

Mark and Tiffany dedicated their lives to making a difference for today’s youth, which are also tomorrow’s future! For almost 20 years, they’ve impacted the lives of hundreds of youth through their Isaac’s Room/Ike Box/Ike Quest programs. They have selflessly served as parents for hundreds who have suffered from a shortage of love throughout their lives.

Let’s see how we surprised Mark & Tiffany Bulgin with the news as we took over their board meeting!

The 68th Annual First Citizen Awards Banquet presented by Pioneer Trust Bank and Mountain West Investment Corporation was a night to remember. Thank you to all those who work to make Salem the incredible place it is to live. Check out more photos from the evening here.