View the photo gallery from the event here (photos in this post and the gallery by Zak Stone Photography). 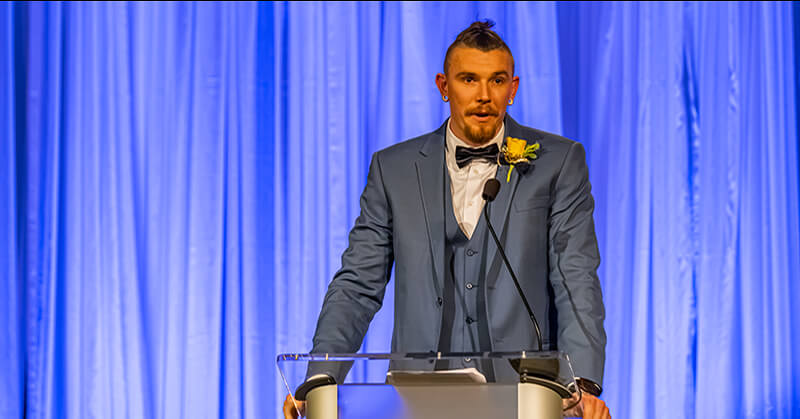 Guests then enjoyed dinner service and the company of their tablemates before the evening’s official program began with a parody “Saturday Night Live” opening video featuring the award recipients out on the town in Salem. Shot and produced by event Gold Sponsor Allied Video Productions, the clip set a fun and lively tone for the night while also introducing Salem Capitals Basketball Club President Jason Conrad to the stage as the event’s host/emcee. “From up here, you all look tremendous this evening!” said the six-foot-eight-inch-tall Conrad from the stage.

Joined on stage by the evening’s live musical act, the Manny Martinez Jazz Quartet, Conrad thanked the event’s sponsors, Chamber ambassadors, and the elected officials and dignitaries in the room for making the evening even more special. However, one community leader was noticeably missing: the late Gerry Frank, who passed away in March at the age of 98. Salem business leader and Gerry’s close friend, Dick Withnell, spoke next, paying tribute to Gerry Frank with a touching speech in remembrance of Gerry’s life and impact on the community.

Next, after reliving the surprise of his award announcement played on the screens in the room, Rich Schultz of his family’s business, Cherry City Metals, took the stage to receive the first award of the evening, as he was named the 2021 Outstanding Young Professional. As an employee in his family’s business from a young age (now he is in management), Schultz was recognized for his hard work in the community, most notably his service to non-profit Family Building Blocks which provides support to children and families in need. As the youngest board chair in the organization’s history, Schultz has helped propel FBB to incredible growth, thanks in part to large-scale engagement events he has led, such as Riverfront Family Fest and Capital City Live.

In a call to fellow young Salem business leaders, Schultz said, “Get involved in whatever you are passionate about that can affect real, positive change. Make a difference. Be ambitious and persistent in making Salem better than ever.” 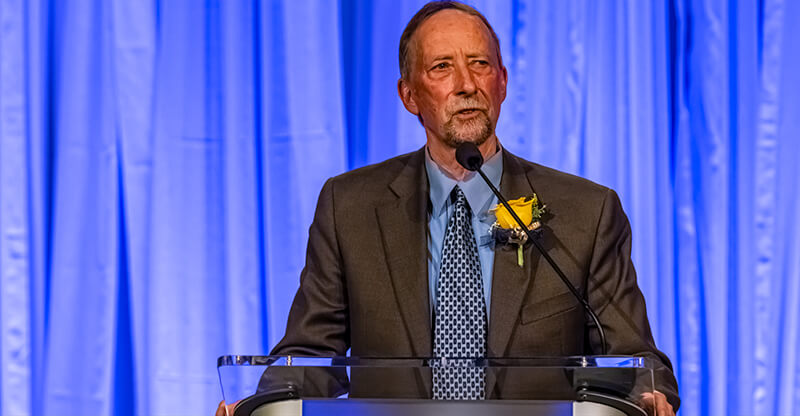 Retired Salem Police Chief Jerry Moore took the stage next, accepting one of three Distinguished Service awards this year. Moore was recognized for his more than four decades of service in law enforcement, including 15 years as the head of the Salem Police Department. During his last few years as chief, a time when police departments across the country have worked under added pressure and extreme scrutiny, Moore was applauded for his efforts in bringing the community together while also working hard to build trust in Salem PD.

“I’ll tell you one of the things I told every recruit I swore in,” Moore said at the podium. “This community wants to love you, but you better give them a good reason to do it. I think that was really important and I think that took hold in that organization because I’m very proud of the work they did in this community.”

Moore, and the audience, also took a moment to pay tribute to his late parents. Moore’s father, Larry Moore, was a Salem businessman who served as Salem Area Chamber of Commerce Board President in the mid-1970s and who also received a Chamber Distinguished Service award in 1982.

“Working in law enforcement for 43 years and watching my parents as I grew up, I learned a lot of things. Developing relationships and surrounding yourself with good people was really important for me.”

Retired educator Mary Jean Sandall received the next Distinguished Service award to cheers from friends and former students. Recognized for her work on numerous non-profit boards, including Isaac’s Room, and her service to the Salem-Keizer School District and to the Salem-Keizer Education Foundation (SKEF), Sandall was quick to give credit to others in the room who had inspired her, including the Bulgins of Isaac’s Room.

“This has been an opportunity to reflect on so many people. I can’t accept this award. I’m thinking about all these other people who should have it. Then, it came to me that it’s an opportunity to share it with them also.”

As a true educator would, Sandall got the entire crowd involved at the end of her speech, leading a rendition of “This Little Light of Mine,” which ended with uproarious applause. 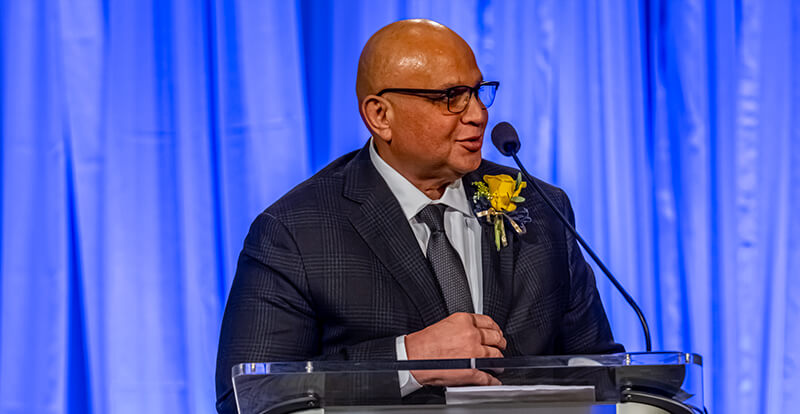 Rounding out the trio of Distinguished Service recipients was the Union Gospel Mission’s Myron Jones, who has served the mission for the last 16 years. Now, as its director of Men’s Ministries, Jones helps lead those in need to a better life using the power of faith, hope, and Biblical teachings. The award recognized Jones for his compassionate work with the homeless community and with those searching for a greater purpose.

“At UGM, we are called to serve the least, the last, and the lost. And it’s our desire to treat our homeless friends with the greatest level of dignity and respect that we possibly can to encourage them, equip them and empower them, and then release them back in the community to serve our community.”

Jones also touched on the important place UGM has in the community and how it has grown over the last 65 years while expressing a deep pride to be part of the organization and its legacy.

“I’m committed to being a dispenser of grace and hope,” Jones said in his speech. “And I’m committed to making an impact on other peoples’ lives needing life change. That is why I believe so deeply in UGM and its mission.”

As is tradition, the night culminated with the award for which the event is named, First Citizen. This year, sibling duo Gary Epping and Shawn Epping Engelberg were bestowed the Salem Chamber’s highest honor for their work with their family’s foundation which donates to a multitude of non-profits each year. A tribute video featuring fellow philanthropists and friends played to a teary-eyed audience highlighting the incredible and very humble generosity of the brother and sister, along with their deep love for the Salem community and its families.

In accepting the award, the Eppings credited many of the non-profits they frequently partner with and donate to for bringing community projects to life.

“When you look at the entities we work with day in and day out, they are solving problems and they don’t need anybody to know about it,” said Gary. “They’re making it happen. We are just privileged to be there to help them.”

In 1993, Gary and Shawn’s father, Larry Epping was also named First Citizen for his work with the foundation he and his wife founded. The Eppings acknowledged that their recent philanthropic accomplishments wouldn’t have been possible without the groundwork laid by their parents.

“We are blessed to have had them hand the reins over to us to let us continue to do the work they were already doing,” said Shawn. “We’re just following in their footsteps.”

An Event for Small Businesses 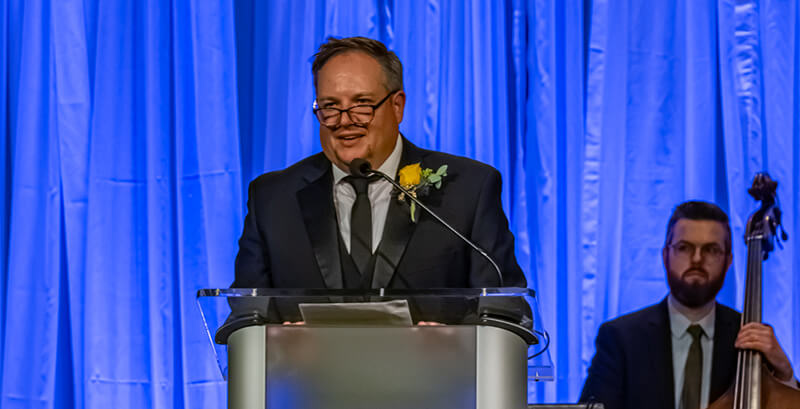 After celebrating our deserving servant leaders, Chamber CEO Tom Hoffert ended the night with a reminder of the importance of small businesses and a message of support for those businesses coming out of the pandemic.

“Our first responders, National Guard, nurses, teachers have been working on our behalf to get us through a national pandemic,” Hoffert said. “But I wish to bring to light one group that is seldom recognized as heroes during this pandemic. And that is the small business community. There is simply no such thing as non-essential small businesses and there is simply no such thing as non-essential small-business employees. At the Salem Chamber, we are humbled by the perseverance of our business community during one of this world’s most challenging times. Our organization does not stand behind you and we do not stand in front of you, but rather, side by side with you, and it is an absolute honor for our board to serve and for this organization to serve your needs.”

Thank You To Our Sponsors

Make sure to save the date for the 72nd Annual First Citizen Awards Banquet: Saturday, April 15, 2023!