How did you first get involved with the Hoop?

In 1998, a gentleman by the name of Jim Kniffin, approached my dad and me at the Hoop and asked us to host a 3×3 basketball tournament as a fundraiser. Jim had been researching the world’s largest 3×3 basketball tournament in Spokane, Washington. Shortly after that, we decided to put on the basketball tournament, and the summer of 1999 was the first year of Hoopla. That first year, we did all the set-up the Friday night before the tournament. Now we’ve grown to the point where we shut down the streets the Monday before it starts and have activities that last from Thursday to Sunday. We grew from 151 teams the first year to 955 teams just this last year. 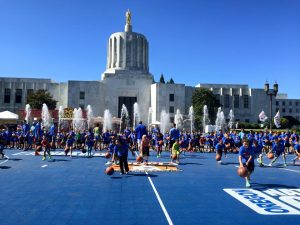 Now in the 19th year, we have become the second largest 3×3 basketball tournament in the nation, behind Spokane. We’ve been so lucky and have had many of the same core sponsors such as, Columbia Bank, which was our first sponsor, and they are still our sponsoring bank today. Capitol Auto Group has been with us since the second year, Les Schwab for over 15 years and the National Guard for over 10 years. There are many others who have been with us close to that long too.

We are to a point now where we have close to 1,000 volunteers and around 30 different youth organizations that help us put on the event. The volunteers, players, spectators and sponsors all love Hoopla. It’s fulfilling to host.

This year, the Hoopla basketball tournament is from August 5-6.

How do your passions fuel your every day?

I like seeing people happy and having the ability to create memories for people. My grandpa always said that our family has too many traditions. Hoopla is a tradition in Salem. Many people have told me it is the signature event for this town. Events make a lasting impression on people. I can think back to my childhood and the events we used to go to like the State Fair and the Art Fair and the impact they had on me. Events bring the Salem community together and that’s one of the things that really fuels me.

With these events that we do – Hoopla, the Bite and Brew, Salem Winter Brewfest, under the nonprofit Hoopla Association, there’s a finality to each of them, paired with a real sense of accomplishment. Each event is its own stand-alone story.

We get great support from the community. This event brings organizations that normally compete against each other or are rivals together. The Kroc Center, Courthouse Athletic Club and Boys and Girls Club and other organizations all working side-by-side. Most of the Salem-Keizer public schools are involved too, and it’s common to see the coaches high-fiving each other and laughing at this event, when they are normally competing against one another.

My next-door neighbor told me that Hoopla is the one time where we know all our friends will be in town and in the same spot to have a good time. The spectators like my mom and grandma love going and being a part of it. To have an event like Hoopla, where I am on the front lines and able to speak with everyone involved and to know what it means to them is so inspiring.

The deadline to sign up is July 18. Register here!

Oregon Beverage Services is a family business, and we specialize in alcohol management at special events all over the northwest. We have always provided the beer at the Bite and Brew of Salem since it began in 1994 so it was a natural fit for the Hoopla Association to take over the event from the South Salem Rotary Club in 2012. 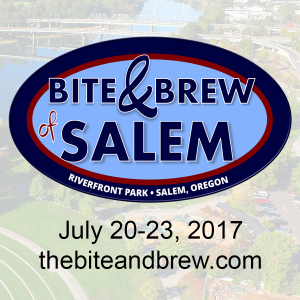 Since then, the Bite and Brew of Salem attendance has gone up, and we now serve over 80 different beers on tap. We changed up the music too, so instead of spending most of the budget on a national act at the end of the night, we do many tribute bands throughout the day with songs that people can sing along to. The Bite and Brew of Salem is the city’s premiere summer party that lasts for four days at Riverfront Park. Fans of all ages are invited to listen to live music throughout each day, ride on carnival rides and games and try unique sweets and savory cuisines, as well as a huge variety of cold beers and ciders on tap.

At the event, we’ve hit the perfect mix of a great, family-friendly party. People feel very safe with their kids. The atmosphere is great right at Riverfront too. It’s an event where everyone can have a good time. We are very proud of that event.

Three years ago, we started the Salem Winter Brewfest, a 21 years and older event. We put up a tent across from the Salem Capitol with headlining music and over 100 beers on tap. We always do it Super Bowl weekend. It’s a cool event to show how Salem is an awesome place to live.

What are your goals for Chamber membership? 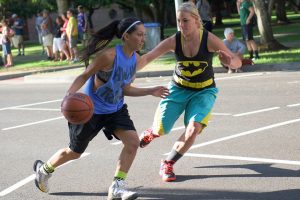 Being in this town my whole life, I’ve always been on the periphery of the Salem Chamber, and I know so many of the members. The Hoop has hosted Greeters before too. Some of my goals include boosting Salem citizen awareness of the Hoopla Association and that it runs the Bite and Brew, Hoopla and Salem Winter Brewfest. It’s important to me that the good things we do for the community and our economic impact is more well known. I would like to encourage more sponsorships for our events too. We’ve proven over time that we are in for long lasting relationships with our sponsors. I am excited to be part of the Salem Chamber.