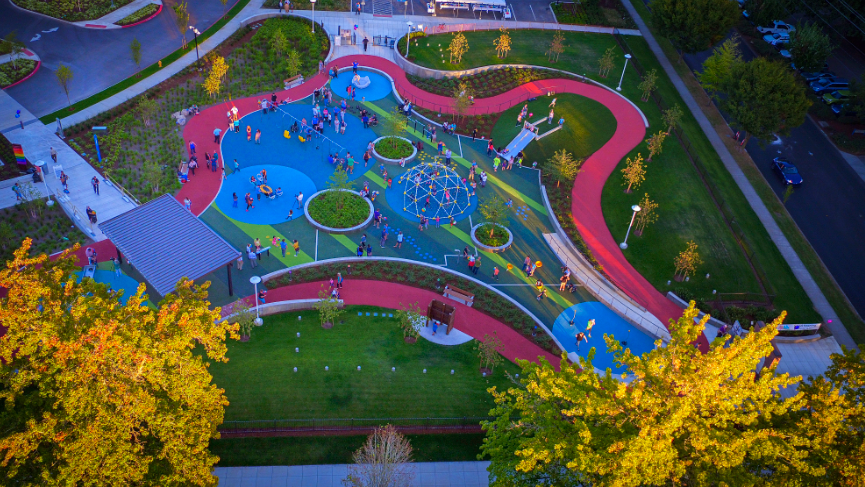 There are few sounds more wonderful than children laughing and playing together at a playground. The squeals of joy often heard are a signal to the sweet innocence of being a child. Salem, Oregon embraces outdoor areas and parks for kids to run around, explore, use their imaginations and make friends. Despite this, many children with disabilities are unable to play with their peers at traditional playgrounds due to safety and other concerns, making these childhood trademarks lonely places. 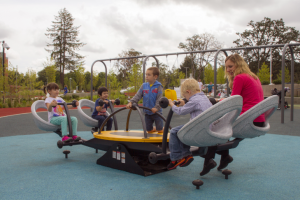 However, thanks to Salem Health, and a $1.4 million-dollar contribution from the Salem Health Foundation, that has changed. Salem Health prioritized building a playground that is wheelchair-friendly and intended for people of all ages and physical abilities called the “Let’s All Play Place”. The playground sits on the former site of the Oregon School for the Blind (OSB), and the final product was the result of a partnership between OSB and Salem Health that honored both the past and the future by creating a space to play that is accessible for all.

Even more remarkable and beneficial is the hospital setting gives Salem Health Rehabilitation Center patients the opportunity to participate and interact with neighborhood playmates. The Let’s All Play Place has elements from other playgrounds, but the swings, slides, jungle gyms and places to run and climb all enhance physical, sensory, emotional, behavioral and social skills. It is a unique space because it creates opportunities for young rehabilitation patients to practice skills like walking, sitting, standing and cooperating, all while at the playground with their peers.

“The playground helps raise awareness for neighborhood kids that aren’t Salem Health patients that other kids are different, but are still able to play,” said Jenna R. Zenk, MS, CC-SLP. “The kids are so much more welcoming of everyone, regardless of ability level, than I could have ever imagined.” 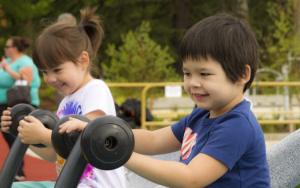 The playground also aids in building common ground for new friendships, and it is the only one of its kind at a hospital. Rehab Center Manager, Phil Haworth, PT, told the story of one young patient who had a hard time balancing and gripping with one of her hands. Usually stubborn, she was more responsive to treatment once outside at the Let’s All Play Place because the other kids playing and having fun around her were motivating.

“We are trying to engage the kids who are often on the sidelines,” Phil said. “The benefits of being outside on the playground affects more than just the child because many parents have never seen their children play and act like a regular kid until now.”

Playgrounds draw children like a magnet, and Salem Health Let’s All Play Place is no exception. Some of the equipment that is valuable for therapy and fun includes sound tubes, which provide a way for children to work on speech intelligibility, expressiveness and noise tolerance. The We-Saw is a new take on a seesaw that is accessible for every child, regardless of ability, and it helps children develop individual core and grip strength, balance reactions and timing and rhythm. The ground is squishy and soft, and the lack of bark mulch makes it possible for those in a wheelchair to move around without issue. 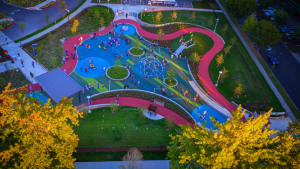 “The functional aspect of having these kids on the playground helps parents see how they can offer support when they get out into the community,” Jenna said. “Out here on the playground is where parents and staff can see the skills the children practice come to life.”

Play is essential to development in children because it contributes to the cognitive, physical, social, and emotional well-being of youth. Play also offers an ideal opportunity for parents to engage fully with their children.

“Normally we see adults on their phone, but here, parents can sit on the tandem swing or We-Saw with their kids, so I see a lot more parents involved with play than at other parks,” Jenna added. “They are playing with their kids because this playground isn’t just one play structure, it has many different options for fun.”

The Let’s All Play Place changed the life of one 11-year-old boy with a powered wheelchair who normally sat on the sidelines with an iPad while his two siblings explored parks and jungle gyms, but at the therapy playground, the boy was just another kid. He could independently maneuver his wheelchair all over the playground, and he played with his siblings by using his powered chair to push them in the merry-go-round. His mom shed happy tears because she had never seen her son just be a kid. The specially designed playground made it possible for this little boy to play with his siblings. 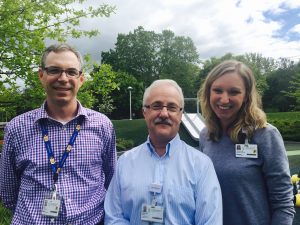 “The interaction of children in therapy with children from the community creates transforming moments that you can’t script,” said Darrel White, Salem Health Foundation Development Officer. “And the fact that the therapy often involves the whole family on the playground, relationships with each other are strengthened.”

The playground has impacted the staff at Salem Health, many of whom wrote testimonials about some of the wonderful transformations they had seen in their patients – either by playing on the playground or sitting out in the sunshine.

Salem Health president and CEO, Cheryl Wolfe, wrote a heartfelt email to staff members that said, “This playground has a unique gift. It strips away differences and empowers commonalities. It creates a place of healing and joy for bodies and souls that have been broken.”

These inspiring stories of children with disabilities thriving and playing with other children would not have happened without the incredible Let’s All Play Place at Salem Health.

The playground is welcome to everyone, so be sure to bring your kids by to participate in the fun!