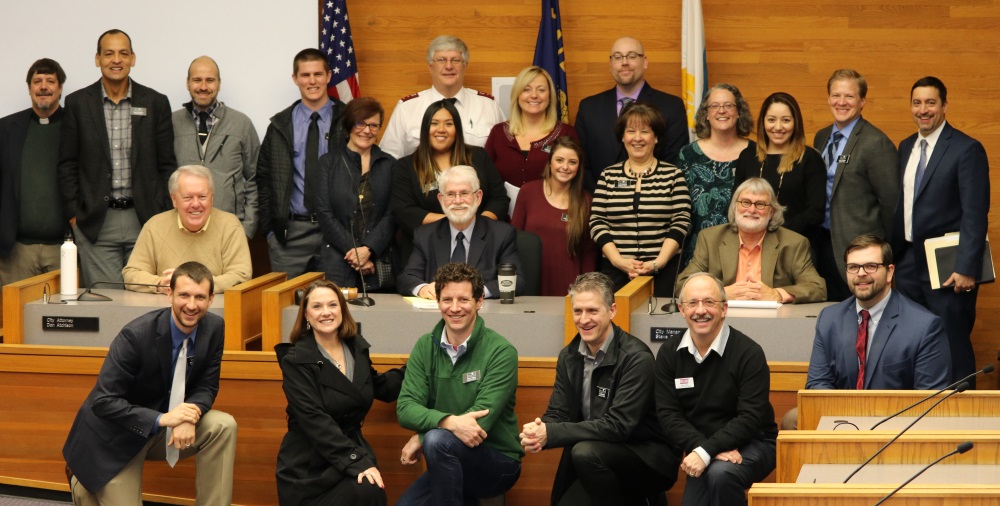 During the February 21st class of Leadership Salem, participants all had homework: to study an issue that Salem City Council could influence, and bring that research in the form of three minute testimony to Salem Mayor Chuck Bennett and City Councilors Steve McCoid and Jim Lewis.

For years, this has been the most nerve wracking session of the nearly four decades old leadership development program. Many, including educators and those that are accustomed to being in front of an audience, wrestle with succinctly citing research and forming an opinion in such a short timeframe.

This class nailed it, though.

Among the most popular topics were downtown Salem revitalization, commercial air service to McNary Field and an additional vehicular bridge over the Willamette river. 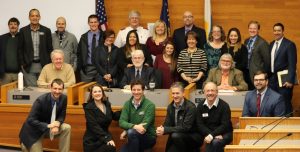 Jennifer Martin, a commercial real estate agent and principal of Mid-Valley Commercial Real Estate, used data and tools at her disposal to, on a map, identify drive times from northern Oregon’s three airports offering commercial air service: PDX, Eugene and Redmond. “You see this sliver outside of the 60 minute thresh hold? This is Salem.” Martin did readily admit that she didn’t have the data necessary to firmly establish her opinion, i.e. what an airport would mean for Salem’s growth and increasing tax base.

Mike Watters, a local marketing professional with SAIF Corporation, used the opportunity to talk through his experience living downtown when he moved to Salem a handful of years ago. “I committed to driving less while living downtown, but that commitment ended within a week. I found it far easier to purchase a pint of beer than a head of lettuce downtown.” Watters has since moved to south Salem, and called upon the Mayor and Councilors to encourage development of businesses that would truly encourage holistic downtown living.

Juliet Valdez of Willamette University talked about the parallels between living in Salem and her hometown in California. “Salem is a community of hard working, committed people.” With her career path in education, Valdez is discouraged when recent grads of Willamette elect to move elsewhere instead of choosing to make Salem their long term home, and feels that downtown revitalization is part of that retention solution.

The experience was enlightening for the class, as many had offered testimony and researched local policy issues for the first time.

A special thanks for Mayor Bennett and Councilors McCoid and Lewis for your availability for this unofficial meeting.

Leadership Salem is a program of the Inspire Foundation, the educational 501/C/3 charitable arm of the Salem Area Chamber of Commerce