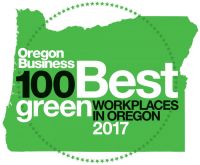 Salem, OR. (July 7, 2017) – Oregon Business Magazine (OBM) ranked Capitol Auto Group (CAG) #5 Best Green Company in Oregon. This is the 10th time the company has been listed in the OBM’s annual ranking.

More than 370 organizations participated in the project. The results of the survey were decided by an anonymous employee survey from over 30,000 employees across Oregon and an independent assessment of the specific employers’ sustainability practices.

Capitol Auto Group efforts to encourage a green workplace include the support of a waste reduction, reuse and recycling program that includes paper, plastic, cardboard, glass, metal and oil. Biodegradable or nontoxic materials are chosen for business process and facility maintenance whenever possible. In addition, employees are encouraged to find new ways to help in waste reduction and energy use. Recently they added six new charging stations for electric vehicles and cut power usage by 40 percent by using energy efficient, halogen outdoor lighting.

At the OBM’s 100 Best Green Workplaces award ceremony, keynote speaker John Morris, Vice President of Market Development of D+R International was complimentary of companies who made the environment a priority. In his speech, he applauded Oregon business efforts. “The 100 Best Green companies will be the foundation from which we become the greenest state in America.”

Capitol Auto Group employees around 300 Oregon workers across their three dealerships: Capitol Chevrolet/Cadillac, Capitol Subaru and Capitol Toyota. In addition to their recognition by OBM, all three dealerships were listed in Automotive News’ 2016 Best Dealerships to Work for in America.
—
About Capitol Auto Group: Capitol Auto Group has served the greater Salem area for more than 90 years. Dealer Scott Casebeer opened the Toyota facility, 783 Auto Group AV NE, in Salem, Oregon off the Parkway, in the fall of 2011 and the Subaru facility in June 2012 at 3235 Cherry AV NE. Chevrolet/Cadillac opened in late July 2012 at 2855 Maple AV NE. In 2013 Capitol, West Valley, pre-owned sales and service opened in Dallas, Oregon. The company has been: recognized by Oregon Business Magazine 10 times as one of the 100 Best Companies to Work for in Oregon; Recognized by Oregon Business Magazine 11 times as one of the 100 Best Green Companies in Oregon; 2012 Salem Chamber Business of the Year; Nine-time winner, Toyota President’s Award, recognized for Toyota Sales and Service Excellence, Recognized for Toyota Parts and Customer Relations; General Motors World Class Technician on staff and GM Mark of Excellence. 2016 Stellar Care Award from Subaru of America. The company was EarthWISE Certified by Marion County in 2013 and nominated for EarthWiSE Certified Business of the Year and Sustainable Large Business of the Year. www.CapitolAuto.com.