Capitol Subaru’s Share the Love Campaign Donates over $57,000 to the Willamette Humane Society 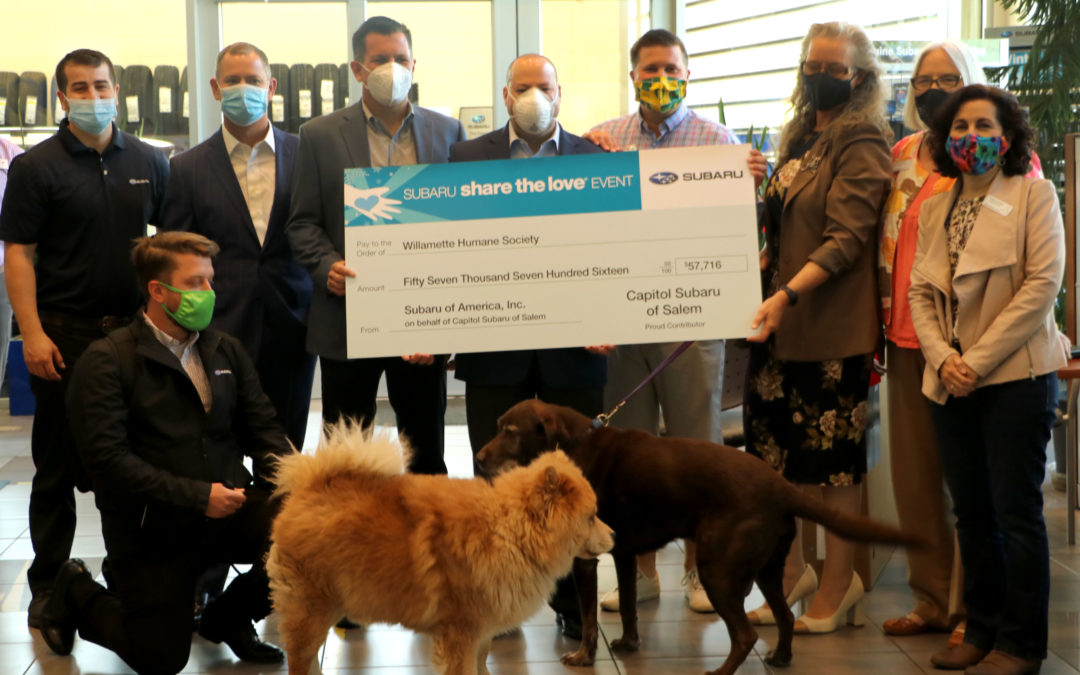 For the seventh straight year, proceeds from Capitol Subaru’s Share the Love campaign will help shelter animals find homes. On April 20, 2021 the dealership presented a check for $57,716 to the Willamette Humane Society (WHS).

One of the cornerstones of Subaru of America’s mission is supporting causes that are important to their company, retailers, and customers. In the past seven years, Capitol Subaru with Subaru of America have raised over $317,000 in donations for WHS.

WHS Executive Director B.J. Andersen attended with her dog Luke. She says, “Capitol Subaru has been an incredibly inspirational partner with the Willamette Humane Society for over seven years. Their support gives hundreds of dogs and cats the time they need and the services they need to find happy new homes. We are so humbled that they chose us as their hometown charity again and that so many people in our community chose us too! We definitely feel the love!”

Executives from Subaru of America attended and toured the Capitol Auto campus and saw the progress of the new Capitol Subaru, slated to open later this spring.

Matt Ritter, VP of Sales for Subaru of America, said, “Capitol Subaru is at the absolute top. They live this love-promise and are leading the way…people want to be part of this promise.”

Brian Moscatelli, Zone Director for Subaru of America, added, “It’s one thing to build a building and another thing to create an experience. That’s what Capitol Subaru is doing.”

In addition to this donation, Capitol Subaru also contributes and participates in the WHS’s largest fundraiser Bowser’s Boo Bash, “Mutts on the Mile” Dog Walk, and holds an annual adoption event for the nonprofit.

Over the last 13 years, through the Subaru Share the Love Event, Subaru of America Inc. and its participating retailers have donated more than $200 million to charity, with customers choosing between four national and over 1,440 hometown charities. According to the Subaru.com website, Capitol Subaru’s donations to WHS have cared for over 2,700 animals.