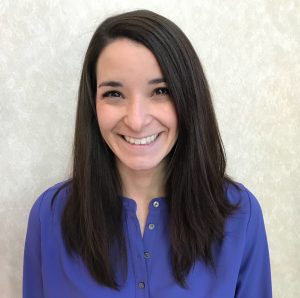 Dec. 14, 2017. Kiki Dohman, a five-year employee of Cherriots, has received a national award for her work in promoting commuting options that reduce traffic congestion in the mid-Willamette Valley.

The Association for Commuter Transportation honored Dohman as one of its 40 under 40 leaders for 2017. Cherriots is best known for its bus service, but Dohman works with Cherriots Trip Choice. The Cherriots program supports carpool and vanpool ride matching, as well as biking and walking initiatives.

“Transit and transportation are so important to the community. It enhances the community in many ways whether it’s equity or economics,” Dohman said. She enjoys doing outreach to local employers and commuters, making them aware of how Cherriots Trip Choice can offer assistance.

All modes of transportation need to be part of the discussion about community livability, Dohman said. The resident of West Salem lives with her husband, Shaun, and 13-month-old son, Beau. Dohman, 30, is a graduate of Western Oregon University and studied business with an emphasis on marketing.

The award honors transportation professionals from public and private organizations across the country, who strive to create long-lasting changes within their communities and organizations. ACT announced its 40 under 40 award winners at an Oct. 18 ceremony in Las Vegas.

Dohman is a director and secretary for ACT’s Cascade Chapter, which includes Alaska, Washington and Oregon. She has coordinated two conferences for the trade association, each of which drew more than 600 attendees.

The Cherriots employee is currently working with ACT to develop a new leadership career development program for transportation professionals.

She is also active in public policy. Dohman has met with members of Oregon’s Congressional delegation in Washington D.C. to discuss transit issues on behalf of Cherriots and ACT.