The 4-Team League will feature the return of the Portland Mavericks, a notorious and iconic team from the 1970’s.  In addition to the Portland Mavericks, the League will be highlighted with the return of the Salem Senators a historic and legendary team that originally began play in 1940.  The Volcanoes and Campesinos de Salem-Keizer, will also become founding members of the new League.

“We have an unique opportunity to bring baseball back the way it used to be,” said Volcanoes CEO Mickey Walker.  “Kind of like the old glory barnstorming days of baseball – except rather than traveling around the country, all the games will be played at Volcanoes Stadium.  Many fans remember the Portland Mavericks with great fondness – this League will have that type of popularity.  We’ll have open tryouts and select the best players from across the country. This will also provide a place for local athletes to aspire to play someday.”  said Walker.

The League will begin play on Thursday, May 13th when the Salem-Keizer Volcanoes will be challenged by the Portland Mavericks – game time is set for 6:35pm.  Games will be played every Thursday (6:35pm), Friday (6:35pm), Saturday (1:05pm and 6:35pm) and Sunday (1:05pm and 6:35pm) for 16 consecutive weeks concluding Sunday, August 29th, with playoffs to follow.  “We’re even bringing back afternoon baseball,” added Walker.  “This will allow even more fans to enjoy the fun.”  Season tickets and ticket packages are on sale now – please email mavericksleague2021@gmail.com  or call 503-390-2225.

“Businesses will have the opportunity to sponsor a team and/or sponsor an individual player(s).  Fans will have the real chance to get to know the players as they will be very accessible, sign autographs and will become a part of the community,” noted Walker.

Players who would like to be considered for the League and be added to the ‘player watch list’ should e-mail their information to mavericksleague2021@gmail.com. All other inquiries should be directed to Mickey Walker at m.walker@volcanoesbaseball.com

Additional information about the Mavericks League, the complete Maverick League 2021 Schedule, Managers and Coaches will be announced in the coming weeks.  Businesses that would like to have first opportunity to sponsor a team and/or sponsor an individual player(s) should call Mickey Walker at 503-779-3389.

About the Portland Mavericks:

The extremely popular, unique and fun-loving Portland Mavericks were an independent team in the Northwest League of Professional Baseball from 1973 to 1977.    They were owned by longtime television actor Bing Russell, best known for his role in the hit television series “Bonanza”.     Bing was also the father of Hollywood legend, Kurt Russell, who also played for the Mavericks in their inaugural season in 1973. 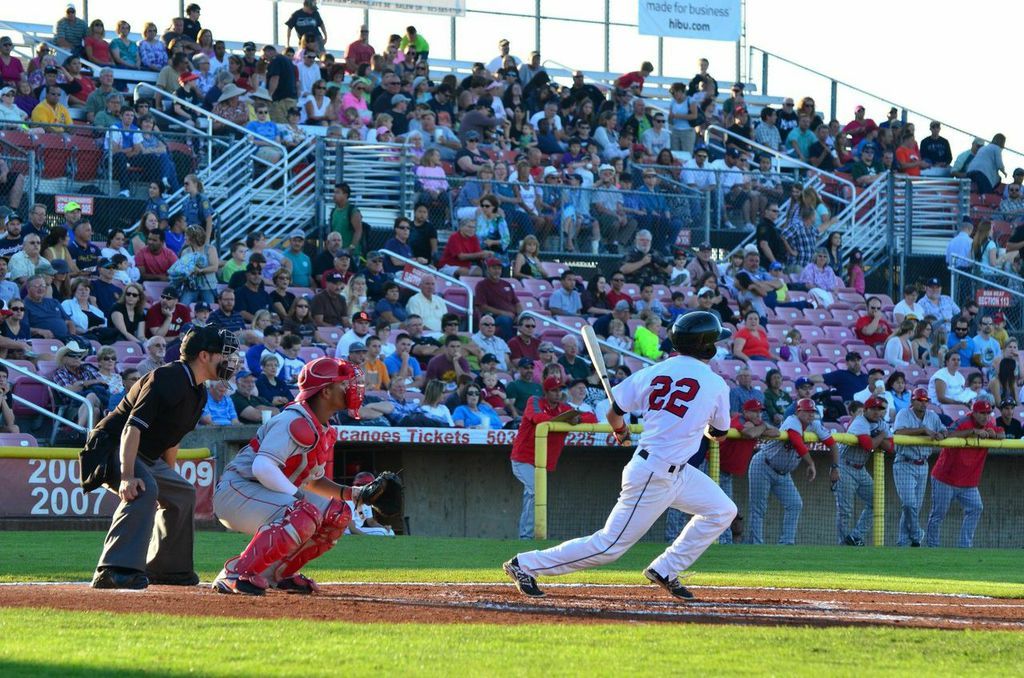 Bing was an innovator, and his Mavericks bore his trademark.    They signed stars – former major league pitcher Jim Bouton – and castoffs from other professional teams.    Bing believed everyone deserved a chance to play and realize their dream, and open tryouts were an annual tradition.    They hired the first professional female baseball General Manager, and the first Asian-American General Manager.     Former Oregon State University standout basketball/baseball player Frank “The Flake” Peters was the player/manager for the team in 1974 and 1975.    Frank signed with the Baltimore Orioles, and played ten years of minor league baseball.    His motto was “no team rules”.      Other notable players were Reggie Thomas, Larry Colton, Terry Jones, Rob Nelson and Dick Rusteck.    The batboy was Todd Field who went on to a long career in Hollywood, including being a three-time Academy Award nominee writer and director.

Welcome back to the fun-loving Portland Mavericks.

About the Salem Senators:

One of the most highly-respected and storied sports team in Oregon history is the Salem Senators. Founded in 1940, and named after Salem, Oregon, the Capital of Oregon, the name has represented many various teams.

Waters Field, previously located at 25th Street, and a block north of Mission, was the home of the Salem Senators.  The brand new 5,000 seat stadium was built by George Waters who relocated the Class B Bellingham Chinooks from Bellingham, Washington.    A record crowd of 4,865 showed up for the first game; the largest crowd ever to attend a sporting event in Salem at that time.   The team went thru many levels of professional baseball – Class A, Class B, Northwest League, Western International League, and in 1961 was renamed the Dodgers after becoming a farm team of the Los Angeles Dodgers.  Notable players were future Major League Baseball Hall of Famers Bobby Cox and Mike Piazza, in addition to Jim Lefebrve and Mel Krause who is a member of the Oregon Sports Hall of Fame.  Waters Field burned down in November, 1966, being set on fire by an arsonist.

However, this tragedy did not derail the Senators as they returned to the Class A Northwest League in 1977.     They played their home games at Holland Youth Park prior to moving to Chemeketa Community College.    In 1981, team President, Clint Holland, signed a player development agreement with the California Angels changing the name to the Salem Angels participating in the Northwest League.    Joe Maddon, who went on to Manage the Anaheim Angels, Tampa Bay Devil Rays, Chicago Cubs and California Angels, and win two World Series, was the Manager of the 1982 Salem Angels.    Notable players were future major leaguers Mark McLemore, Kirk McCaskill, Bob Kipper, Jack Howell, Ray Chadwick, Dante Bichette, Doug Jennings, Erik Pappas, and Chuck Finley.  1987 was the team’s last season in the Northwest League, and featured OF/3B Ruben Amaro, Jr.

And as they say “what goes around comes around”, and we proudly welcome the Salem Senators back in 2021. The highly-respected and storied team remains after 80 years.

About the Salem-Keizer Volcanoes:

One of the most successful sports franchises in Oregon history is the Salem-Keizer Volcanoes.     Playing in the Northwest League from 1997 thru 2020, the Volcanoes won 7 Divisional Championships, 5 Northwest League Championships, and have seen 112 players pass thru on their way to the major leagues including super-stars Buster Posey, Tim Lincecum, Pablo Sandoval, Brandon Crawford, Joe Nathan, Joe Panik, Sergio Romo and Ryan Vogelsong among many, many more.

Similar to the Salem Senators being created, due to a relocation from Bellingham, Washington to Salem, so were the Salem-Keizer Volcanoes.     In 1997, Volcanoes owners Jerry and Lisa Walker, along with their partner, Bill Tucker, relocated the Bellingham Giants and built a beautiful new stadium in Keizer – architecturally award-winning Volcanoes Stadium.     Thru 2020, the Volcanoes participated exclusively in the Class A Short-Season Northwest League of Professional Baseball.

The Salem-Keizer Volcanoes have won many outstanding awards such as the 2001 Best Class A Short Season franchise in America, the 2007 National Team of the Year, and 2017 Minor League Baseball’s Best Promotion.  The 2006 Volcanoes set an all-time Northwest League Record in winning percentage posting a 55-21 record (.724) only to be broken the very next year when the 2007 Volcanoes posted a 57-19 mark (.750).  For the period 2006, 2007, 2008, and 2009 – the Volcanoes were not out of first place, not even for a single day at any time during the season, for 4 consecutive years!!!!  The Volcanoes set an all-time attendance mark on July 4, 2006, when 5,627 fans attended the teams Patriotic Tribute – the largest crowd ever to attend a sporting event in Salem-Keizer.

The Volcanoes have been home to the award-winning Cancer Awareness Weekend going on its 20th year.     Founded by cancer survivor, Volcanoes owner, Lisa Walker, along with oncologist Dr. Bud Pierce, this widely-recognized weekend recognizes and honors hundreds of cancer survivors with on-the-field ceremonies and gifts.    In 2005, Lisa was awarded the prestigious Rawlings National Woman Executive of the Year at Baseball Winter Meetings in Dallas, Texas for her extensive efforts in recognizing cancer survivors.

In 2019, Jerry Howard, of the Volcanoes staff, was awarded the illustrious Charles K. Murphy National Patriot Award, at Baseball Winter Meetings in San Diego, California, for his many years of recognizing and honoring our service men and women, and all Veterans, during the Volcanoes’ annual 4th of July Patriotic Tribute.

2020 brought another milestone to the Volcanoes organization, as Mickey Walker, son of Jerry and Lisa Walker, was named Chief Executive Officer of the Volcanoes, and a new generation now leads the Volcanoes forward.

Yes, the Salem-Keizer Volcanoes are still going very strongly, and good, wholesome family entertainment remains in the greater Willamette Valley.     Thanks to the Walker family, and thousands of dedicated and loyal fans, this storied franchise continues to “PLAY BALL”.

About the Campesinos de Salem-Keizer:

The Campesinos originated in 2019 as part of Minor League Baseball’s “Copa de la Diversion” or “Fun Cup” initiative.  A tribute to their hard work, Salem-Keizer’s Campesinos moniker pays tribute to the collective contributions of farm workers toward establishing Oregon as one of the leading agricultural regions in the United States.  Campesinos is designed to embrace the culture and values that resonate with the Hispanic/Latino Community of Oregon and the greater Willamette Valley.     Campesinos means “farm laborer”, and the world-wide leading agricultural community of Oregon is very fortunate to have these very fine workers, very fine individuals, working on our rich agricultural farms.

The 2021 Campesinos team will be the very first team in the Salem-Keizer area to embrace these outstanding farm workers.   “The fact the kids are loving the program made it resonate loudly with us”, said Mickey Walker, CEO for the Salem-Keizer Volcanoes. “We can hardly wait for the Campesinos to take the field this summer”.   You will see “Campesinos de Salem-Keizer” hats and shirts everywhere.  They are currently on sale at the Volcanoes Stadium Team Store.    Minor League Baseball reports crowds were 24.4% larger on “Copa de la Diversion” nights in 2019, and the new logos became a national merchandising sensation.

A special thanks to The Latino Business Alliance, and other local Hispanic community members that were involved in development of the name and brand – especially Everando Castro of Solo, Inc. in Woodburn, Bo Lane and Eric Fisk for their contributions in the logo and brand development.  It is easy to be excited about this new team that honors our Hispanic and agricultural community.