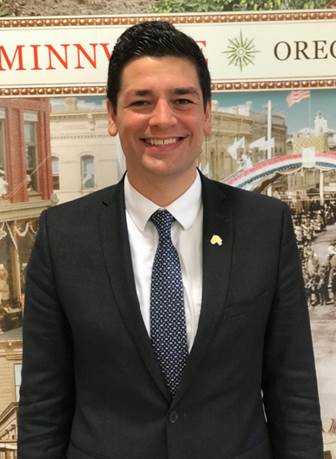 SALEM, Ore. — Wells Fargo Home Mortgage has appointed Brian Larsen to a mortgage consultant position in Salem. He is responsible for providing residential mortgage loans to homebuyers in the Salem metro area. Larsen is based at 580 State St.

Larsen previously served as the manager of Wells Fargo’s bank branch in McMinnville for two years.

He joined Wells Fargo in 2007 as a teller in Utah. The Oregon native later served as a lead teller before transferring to McMinnville as a personal banker in 2010.

Larsen later served as a banker in Hillsboro before moving to Connecticut where he managed several branches at different times.

Larsen returned to Hillsboro where he served as a branch manager. He later managed two branches in Salem. He was named manager of the McMinnville branch in 2015.

Larsen earned a bachelor’s degree in business and psychology at Brigham Young University in Provo, Utah.

About Wells Fargo
Serving Oregonians since 1852, Wells Fargo & Company (NYSE: WFC) is a nationwide, diversified, community-based financial services company with $1.8 trillion in assets. Wells Fargo provides banking, insurance, investments, mortgage, and consumer and commercial finance through 8,800 locations; 13,000 ATMs; the internet (wellsfargo.com); and mobile banking. Wells Fargo Home Mortgage is one of the leading providers of home loans in Oregon and the nation.