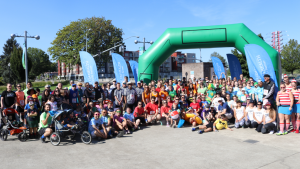 Click here to register for this year’s Great Salem Race on August 18. Don’t miss out on the fun!

Over one hundred people gathered at the Salem Convention Center on Saturday, August 19, to participate in the seventh annual Great Salem Race. 42 teams dressed in costumes raced to solve clues, complete challenges and have fun at the event hosted by the Salem Area Young Professionals.

Group photo before the race!

The Great Salem Race is the ultimate Salem scavenger hunt and team building experience. Open to all ages, teams of two to four received a list of clues which led them to local businesses in downtown Salem. Traveling only on foot, each team had to complete challenges such as filtering water or performing a monologue before receiving a stamp for their completion.

After visiting all locations, teams traveled back to the Convention Center to cross the finish line and enjoy post-race festivities.

“This is an affordable, family-friendly, action-packed event downtown that brings families and businesses together,” said Morgan Sund, chair of the planning team. “After being involved last year in the planning of the Great Salem Race, there was no way I would stand back and not participate this year.” Sund is on the leadership team of Salem Young Professionals, a program of the Inspire Foundation that exists to connect professionals in their 20s and 30s and provide professional development opportunities.

Leading the pack in the competitive division was Cities in Oregon with a time of 57:45. Each team 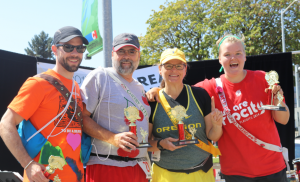 Team Emoji won the family division with a time of 1:01:49. This team of four was familiar with the victory circle after taking second place last year. The Flying Platy-Pi took second place with 1:10:09 followed by The Acosta Avenger taking third at 1:11:24.

The fun didn’t end after the race. Back at the Convention Center, food, drinks and live music awaited race participants. Each competitor received a beverage and ice cream sponsored by CD Redding Construction. El Patron Mexican Grill was also on the scene selling their food. As people waited for the rest of the teams to arrive, they could play cornhole, join a water balloon toss or even joust in a bounce house. Live music by Cool, Calm and Collected, a jazz group of recent North Salem High School 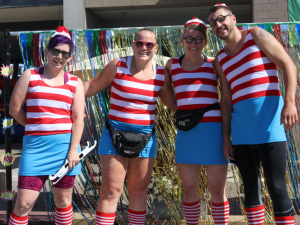 Team “Where’s Waldo” won the costume contest! Be sure to check out the Facebook page for more wacky costumes.

Salem Health was the title sponsor for the event this year. “The Great Salem Race encourages families and friends to be active and see their community in a new way,” explained Bryce Petersen, community relations liaison for the hospital. “Salem Health is proud to sponsor events like the Great Salem Race that promote healthy and active lifestyles.” Other sponsors were B2 Taphouse, Salem Electric and the Ike Box. 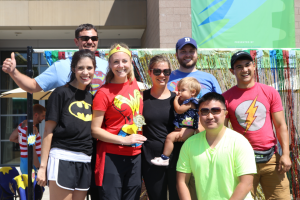 Salem Young Pros team that put on the event.

“I received multiple businesses’ feedback that they appreciated the opportunity to be a clue location and share their business with the community,” Sund remarked. “It’s a win-win for everyone.”

Check out more photos from the day on Facebook here!

The Great Salem Race is an event planned by Salem Young Professionals in partnership with the Salem Leadership Foundation.